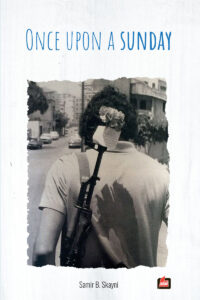 Once Upon A Sunday

This way, the war turns into a long cinematic film featuring the main story, which in turn contains individual stories, as well as place and time, the characters, and history proper (in its broadest sense). The most we can do today is narrate past events that we reminisce about and observe from the outside either critically, remorsefully, or proudly. We realize that the account we are now relating concerns one event or many events that we have already experienced in day-to-day details and consequences. This means that we had a hand in creating this film due to the time we lived through, due to history and its exigencies, due to the touch that we wanted to add to the story.

This book -which contains 5 stories from the time of war- is directed, first and foremost, at the younger generation, that we may learn from the past and draw lessons from it. As Ziyad says: The difference between our day and the eve of the civil war is that the generation of the war is still around to tell the tale. A great many Lebanese know how atrocious and hideous the war was; we didn’t have that back then. […] We didn’t have anyone to warn us and say: “Watch out. You’re going down the wrong path.”

In the second place, this book is directed at the older generation that witnessed the war, or at least a part of it, calling upon them to adopt the same objective critical method when relating events instead of resorting to dogmatism that breeds more narrow-mindedness and intolerance. The book is also a call for that generation to responsibly and consciously work on unpacking the collective trauma that the civil war caused: in the very least, every person should begin reflecting on that period at the individual level.

There are no reviews yet.

Be the first to review “Once Upon A Sunday” Cancel reply